"I didn't set out to work in a distillery – it was almost by accident – but probably the best accident that ever happened to me."

A gregarious character at the heart of the Jameson Midleton Distillery, Brian Nation’s enthusiasm for his job comes from meeting like-minded individuals who share his passion for the craft and skill that goes into creating an iconic range of whiskeys. “I love travelling around the world to promote and educate people about Jameson. I love getting the opportunity to bring the Jameson message to the people”.

Just as whiskey benefits from its chosen casks, Brian Nation was matured for 10 years under the tutelage of former Master Distiller, Barry Crockett. Despite the daunting task of filling his mentor’s shoes, Brian emerged as a highly regarded distiller in his own right. Brian joined Irish Distillers in 1997 after graduating with an engineering degree. He oversaw various projects in the environmental department, until 2002, when he began to work on some of Jameson’s most storied blends. In 2006, he became the first Irish Distiller to receive the Worshipful Company of Distillers award, for achieving the highest IBD exam results in the world. As Head Distiller, Brian is responsible for maintaining the quality of all new pot and grain distillates produced in Midleton. The monumental task of overseeing the production process from brewing to distillation comes with the fringe benefit of tasting the whiskey on a daily basis, to ensure the correct balance of flavours and unique pot still spiciness. “Jameson is a single distillery whiskey; it’s a blend of a pot still whiskey and then a grain whiskey, both produced at the Jameson Distillery in Midleton. That is very important for me as Head Distiller - to ensure the quality of the product from grain to glass”. When asked what he enjoys most about his role, Brian is quick to mention, “it’s the strong team ethic, everyone is heading in the one direction”. As a team player, Brian has been instrumental in expanding the Midleton Distillery in recent years, always bringing fresh new ideas to the fore. He is a man grounded in tradition, and driven by a passion to ensure that the whiskeys of Midleton continue to be amongst the best in the world. 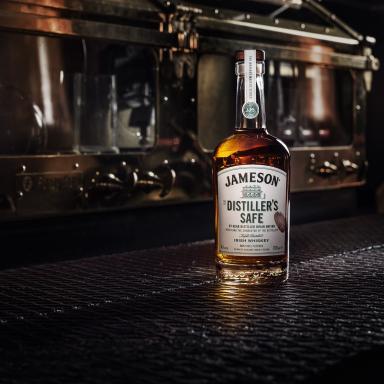